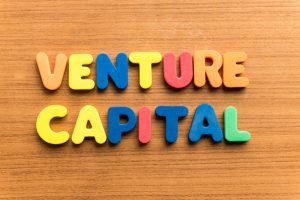 Last year, we analysed the trends that were taking place in the Venture Capital Transfer Market in London between 2016 and 2020. This year, we wanted to follow up with what we saw take place in 2021. To recap, in our previous analysis, we found that, in general, the amount of lateral hires in the VC sector had been steadily increasing since 2016, as well as the fact that major US law firms were consistently hiring in this space.

When comparing our data to our previous findings, we can see that the amount of lateral hiring has continued to increase from 2020 to 2021, following the same route as the previous trends. US and UK firms continue to show a heavy interest in building out their teams as the market is extremely busy and firms want to have the bandwidth to support as many clients as possible as well as appear attractive to prospective clients.

2020 was no doubt a record year in VC investment, with tech firms raising $10.5 billion total, and $249 billion in global funding being invested. 2021 turned out to be no different, with global funding skyrocketing 111% to reach $621 billion. Overall, the amount of capital being invested into tech grew at a steady rate, and seed investors were raising larger and larger funds.

In the UK alone, fintech investment topped $37.3 billion in 2021, a sevenfold increase compared to 2020, with over 600 M&A, VC and private equity deals finalised. London has further cemented itself as the leading European tech hub by way of total capital invested, as London raised $18.4 billion in the first 9 months of 2021, which was 2.6 times more than Berlin in second place. These record level investments have largely been driven by bigger rounds, as rounds over £250 million became 10 times more popular in the last year, and they now represent roughly 40% of the total capital being invested in Europe. In the same vein, rounds below £5 million have stagnated. These are typically at the pre-seed and seed-level of investment, and this is seen as a sign of a “seed squeeze”. However, the volume of investment rounds that are under £5 million is approximately the same as what occurs in the US and it accounts for 33% of all money invested in European tech. 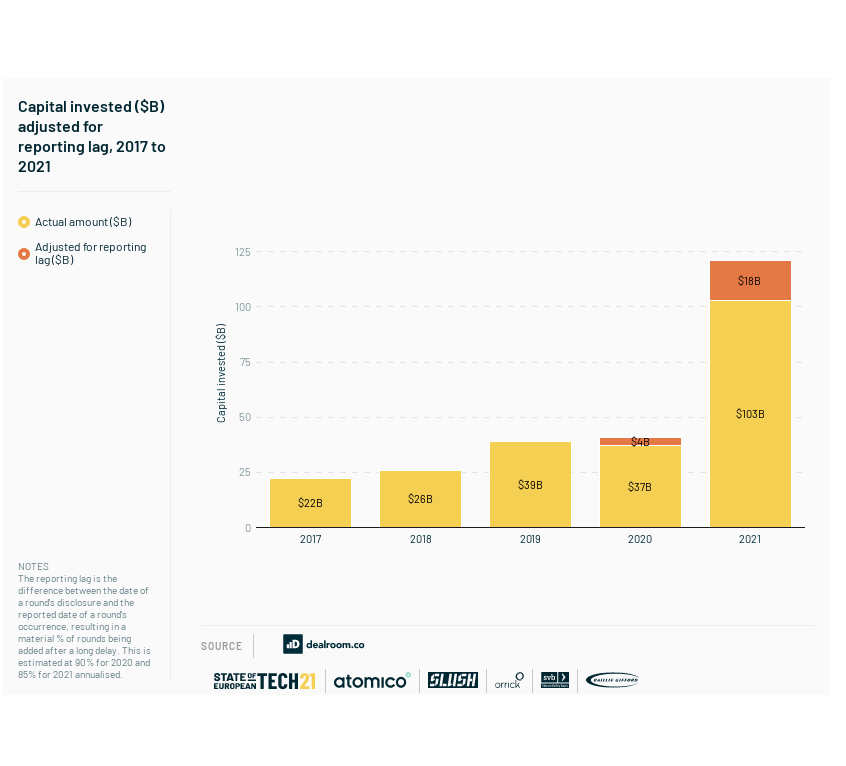 The global unicorn counts has reached an all-time high with 959 companies, a 69% increase from 2020’s 569 unicorns. In Europe, 98 companies rose to the title of unicorn in 2021 alone. The decacorn herd, which is for companies that are worth $10 billion, has also doubled in size, as 26 European companies now hold this status. There is an array of cities in Europe that have become hubs for unicorns. Munich, Stockholm, and Cambridge are leading on ‘unicorn density’, but when looking at cities with a population greater than 1 million, Munich is the clear leader, with London not too far behind them. 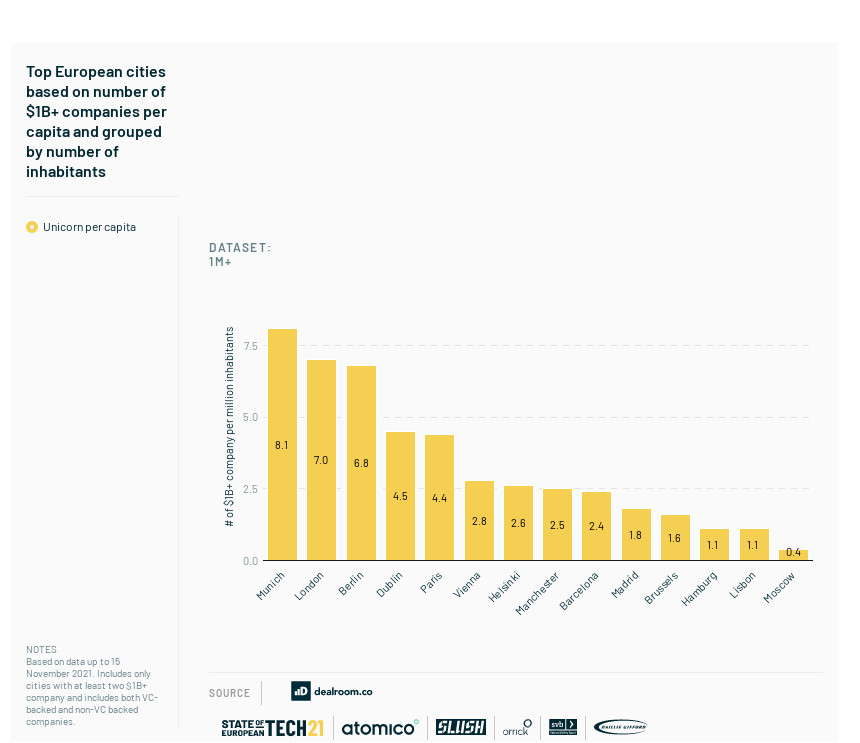 New countries have joined the unicorn this list year, with Latvia and Cyprus being represented by Printful, who raised a $130 million growth rounds in May, and Nexters Group, who reached the status with a $1.9 billion SPAC deal. However, it is clear that, despite the density of unicorns in Munich and Stockholm, the UK is still the leading producer of unicorns, and has reached a momentous milestone having produced 100 unicorns in total. 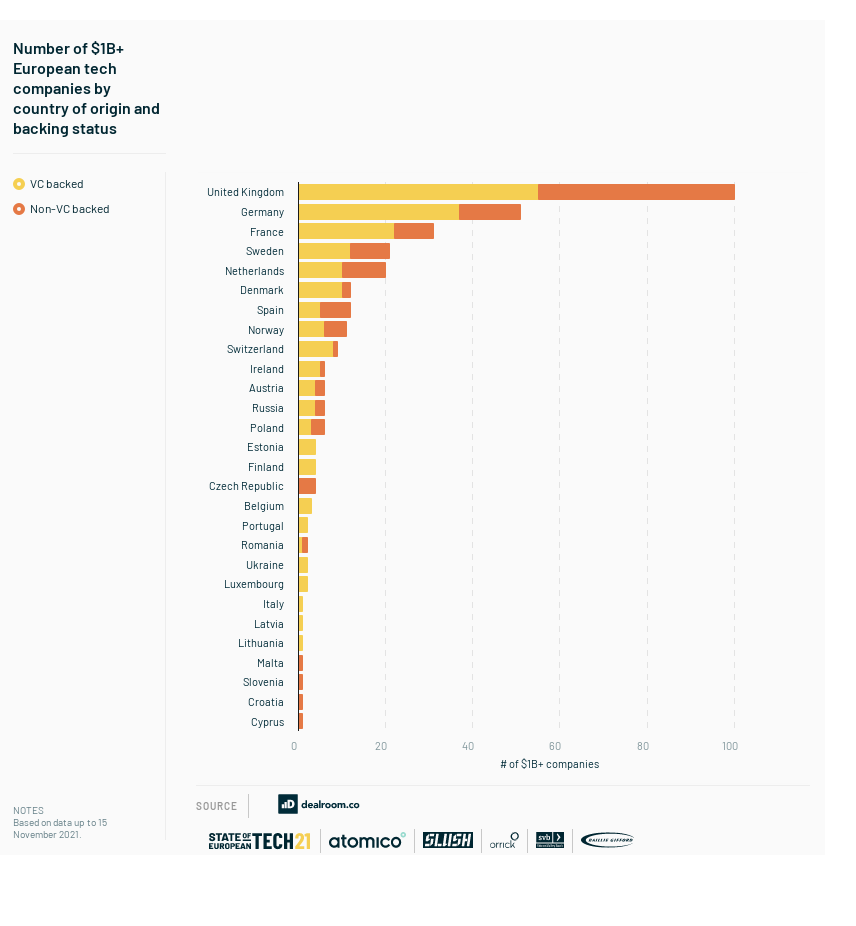 Cross-border investing is also on the rise. While it is common to see US-based investors making investments in Europe, it is now becoming commonplace for European funds to inject capital into the US markets. It is expected that while European VC will “spread out” because physical location matters less and less, “foreign VCs”, namely those from the US, will still be very prevalent, particularly in the later-stage rounds. Christoph Reudig of AlbionVC credits this to the fact that “a lot of European countries don’t have the same kind of cash-rich investors as they do in the US… It takes time for an ecosystem to develop and we’re starting to see local investors exploring [later-stage] opportunities, but in the short term, I don’t think they will be as involved”. European tech itself is reaching unprecedented levels of growth and investment as it is currently on track to break the $100 billion milestone of capital invested in a single year, tripling the amount invested in 2020, so it is clear that these investors are getting involved, and in a few years’ time we will likely see the gap closing in the later-stages. As you can see in the chart below, European technology companies have already made their mark in early-stage funding, with the European share growing at the direct expense of the US – Europe has increased its share of funding by 13%, while the US has decreased by almost 20%. This shows the developing investor desire that will no doubt continue to grow in the amount of late-stage funding that occurs.

Competition is very strong leading to bigger valuations and bigger investments. There will be more emphasis on what additional resources VCs can bring to founders when competing to win deals with a big focus on human capital and talent as well as experience.

There will of course be challenges ahead and there is no surprise that ESG-related goals have come to the forefront of minds, both with start-ups and investors alike. Blackrock CEO and Chairman Larry Fink boldly stated: “It is my belief that the next 1,000 unicorns won’t be a search engine, won’t be a media company. They’ll be businesses developing green hydrogen, green agriculture, green steel, and green cement”. All tech companies and investors should pay close attention to ensuring good governance and understanding European disclosure requirements (see Articles 8 and 9 in the Sustainable Finance Disclosure Regulation (SFDR)).

We discussed last year the need to put a greater emphasis on diversity and inclusion and sadly not much has improved on that front. In 2021, diverse teams captured only 9% of the capital raised, despite there being clear evidence that they out-perform non-diverse teams. Although Pitchbook posits that talent will remain the biggest challenge for start-ups, we believe that the talent will, should and must come from increasingly diverse pools of candidates.

It is widely thought that while there will still be significant growth into 2022, the growth will likely be slower this year. With the rate of growth expected to plateau slightly, it is posited that the amount of lateral hires made this year will be similar to the amount made in 2021. Diversity is of course an issue for some of the law firm teams as well as we feel that this might have an impact on both lateral hiring and promotions in this space in 2022.

As Europe continues to cement itself as a giant in the world of VC, we will be interested to see how to trends of individual countries develop and compare to the trends that have been occurring in the UK.

all charts courtesy of State of European Tech 2021