Hello and welcome to the Fides Weekly Update. Take a look at this week’s key trends, moves and developments in legal and compliance.

Tweet us @Fides_Search to let us know your thoughts. 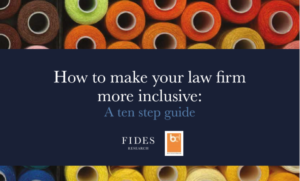 This week sees the release of our latest white paper on Inclusion and Wellbeing, published in collaboration with byrne.dean.

‘How to make your law firm more inclusive – A ten step guide’ builds on industry research and expert insight to provide a list of steps that individuals, senior management and HR and D&I professionals can take to increase the inclusion and wellbeing of people within their firm.

We hope you enjoy!

For further information about the Inclusion and Diversity thought leadership initiative at Fides, please contact eclews@fidessearch.com.

After a five year investigation from the Serious Fraud Office, Barclays announced on Monday that the conspiracy to commit fraud charges against the bank had been dropped by the Crown Court.

This centred around the alleged financial assistance that Barclays gave to Qatar at the height of the financial crisis, more specifically a $3bn loan to directly or indirectly acquire shares in a fundraising which helped the bank avoid state bailout.

This is seen as a victory for Barclays, which recently settled a probe into its handling of a whistleblower as well as a $2bn mortgage selling case in the US.

However, charges against the bank’s former chief executive John Varley, and other top managers Roger Jenkins, Thomas Kalaris and Richard Boath remain in place, with a criminal trial scheduled in January 2019.

The SFO said it was considering its position in the light of the ruling, although many believe it will bring a voluntary bill of indictment against the bank, a rare legal process which means any fresh charges against the bank must be approved by a high court judge.

As the first set of charges in the UK to be brought against a bank for actions taken during the financial crisis, the decision is a major setback for the SFO which has investigated the case for five years and is now without a permanent director following the departure of David Green last month.

With a replacement yet to be named, questions continue about the future of the organisation and whether or not it will be subsumed into the National Crime Agency.

A team of 15 lawyers across four different US offices of Norton Rose Fulbright offices have moved to join Reed Smith. Two associates, Selina Coleman (Washington DC) and Sara Brinkmann (Houston), will be made up to partner as part of the move.

Hogan Lovells pulls out of Venezuela amid political and economic upheaval