Hello and welcome to the Fides Weekly Update. We’re here to bring you a breakdown of this week’s most interesting new stories in legal and compliance. Scroll down to see the Movers and Shakers of the week.

Promotion season is upon us, with a number of UK law firm’s announcing their latest rounds of promotions this week.

Of the Magic Circle, Clifford Chance and Linklaters announced global promotion rounds of 24, whilst Allen & Overy have made up 21 associates to partner. With 10 partners made up in the city, Linklaters saw the largest number of promotions in London, followed narrowly by Clifford Chance (9) and A&O (6). Whilst promotions were evenly distributed across the UK and EMEA with the former, A&O made up the majority of their partners in the Asia-Pacific in a predominantly banking-focused promotion round. On the other hand, Linklaters favoured its capital markets practice having not made any promotions in this space last year, whilst at Clifford Chance promotions were split evenly across corporate and finance.

The story was similar at global firm Herbert Smith Freehills who announced their latest round of promotions today. The firm made up 20 partners worldwide, including six in Australia and seven in London. Of this, eight were made up into corporate and five into finance. 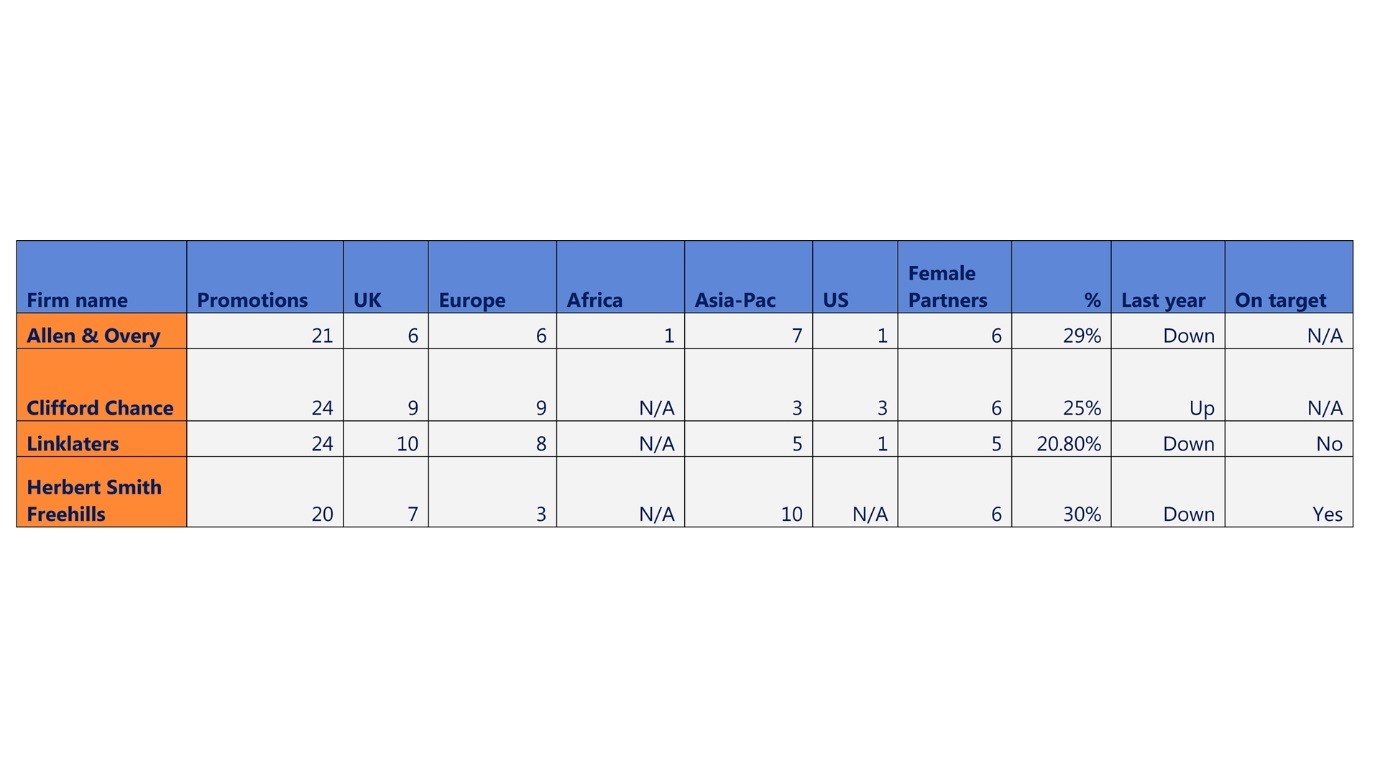 Focus on gender equality has not been far from these announcements, with Clifford Chance and A&O making up six female partners (25% and 29% respectfully) compared to Linklaters five. This was down on last year’s promotion round for A&O, who made up an impressive nine women to partner (40%) in 2015. Herbert Smith Freehills also made up six female partners, putting them in line with the 30% female partnership target they set to achieve in 2019, however this too was down from nine female partner promotions last year.

This is in contrast to Clyde & Co and Mischon de Reya, who also announced their promotions rounds in the past few weeks. Clyde & Co achieved parity in its number of female promotions, making up eight women in a record-breaking promotions round of 16 new partners. On the other hand, Mischon de Reya made up four female partners in a majority female promotion round, following on from its all-female promotion round in 2015. In 2014 the firm introduced ‘unlimited holidays’ and a new agile working policy in a bid to retain and attract talented female individuals.

At the same time, Macfarlanes were criticised in the legal press for their lack of female promotions, making up no women for the first time in three years. This is in contrast to previous promotion rounds, which have seen a minimum of 30% female partner promotions in recent years. In commenting on the promotions, Senior Partner Charles Martin noted that the round was a “large group by historic standards but one that is uncharacteristically and disappointingly lacking in women.”

In conclusion, it is encouraging that the proportion of women made up into partnership has become a cornerstone of this reporting. However as shown with Clyde & Co and Mischon de Reya, the actualisation of equal or majority female partnership rounds are dependent on the alignment of factors specific to a firms size, practice area focus and internal culture.

For a copy of our article A Path to Parity: Reassessing Gender Balance within UK Law Firms please contact research@fidessearch.com

Mitsubishi Motors has suffered another blow to their business due to a failure in compliance, something which the company has struggled to resolve after a number of shortcomings.

This week Mitsubishi Motors Corp. disclosed a manipulation in their fuel economy testing after Nissan found discrepancies in cars provided to them by Mitsubishi Motors. It seems the Japanese carmaker managed to publish improved fuel economy data by flattening their types to bring about lower mileage rates.

Company President Tetsuro Aikawa has been sincerely apologetic about the scandal, saying that although he was unaware of the fraud, he feels responsible. The false data has led to 625,000 cars having to be recalled and Mitsubishi shares plummeting by 33%, as reported by CNN Money.

The company have had an unfortunate history involving such quality lapses and recall failures, spanning over a decade. In 2000, Mitsubishi Motors announced that it had covered up safety defects and customer complaints about its vehicles, which led to the admission of broader problems going back decades and, in turn, the biggest automotive recall scandal of all time.

Mitsubishi’s regulatory compliance and internal oversight have hardly improved since these wrongdoings. The carmaker has failed in reinforcing a compliance culture into the business, something which Aikawa claims has been extremely difficult to instil into all employees. Nikkei Asian Review has remarked that failures in their internal chain of command and poor sharing of information is the root cause of their compliance failings.

This is just the latest scandal to hit the automotive industry, after Volkswagen were caught rigging emissions tests last year. The German carmaker came to an agreement this week with US regulators as part of the settlement regarding their emissions scandal. It was also announced today that fellow German carmaker Daimler, the owner of the Mercedes Benz brand, has begun an internal investigation into the way it certifies diesel exhaust emissions in the US.

Violations of regulatory compliance are a regular occurrence in the automotive industry. Regulators are becoming much more aggressive in enforcing regulatory frameworks and with increasing importance placed on reputational risk and preventing brand damage, carmakers in the industry will have to begin developing better approaches in ensuring compliance standards are met.

Movers and Shakers of the week

Clyde & Co promotes 16 to partnership, five in the City

Linklaters makes up 24 partners, 10 in London

Herbert Smith Freehills makes up 20 globally and seven in London